The 280,000-square-foot facility is expected to greatly broaden the Port of Oakland’s ability to handle frozen and chilled foods.

The new cold storage warehouse, which will be able to handle up to 1 million tons of product annually, was created through a partnership of Lineage Logistics, whose expertise is in temperaturecontrolled supply chains and logistics; and Dreisbach Enterprises, which provides refrigerated warehousing facilities.

“We believe this is a gamechanger for the supply chain at the port,” said Mike Zampa, a spokesman for the Port of Oakland. “It is the biggest development the port and its partners have brought on-line in years.”

The Lineage Cool Port facility has a direct railway connection at one of its entrances, which creates access to anarray of rail lines.

“Cool Port is now one of the fastest, most cost-effective and quality-controlled means of transporting perishable foods internationally,” said Greg Lehmkuhl, president of Lineage Logistics.

Among the new customers that are expected: suppliers of frozen meats and other perishable goods that are located in the Midwest that might be delivering to recipients in Asia.

“We’ll more efficiently connect U.S. producers to Asian markets and in the process create hundreds of jobs in our own backyard,” said Jason Dreisbach, president of Dreisbach Enterprises.

“The hiring will increase as volume ramps up,” Zampa said.

“Cool Port isnow one of the fastest, most cost-effective and qualitycontrolled means of transporting perishable foods internationally” 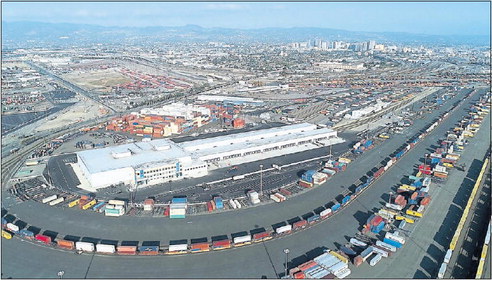 Among new customers that are expected to take advantage of Oakland port’s new cold-storage facility are suppliers of frozen meats and other perishable goods that are located in the Midwest that might be delivering to recipients in Asia.

The new facility, which has been designed to appeal to rail traffic, is expected to increase container traffic at the Port of Oakland by 0.5 percent to 2 percent a year. That might not sound like much, but the port moves about 2.5 million containers annually.

“When items arrive by rail they go to Cool Port where the product can be immediately transferred from rail cars to 40-foot ocean containers, which would be refrigerated,” Zampa said. “Exporters can send rail cars to Oakland that are heavily laden with chilled and frozen meat products.”

The icy warehouse has 90 trucking docks, 18 rail car positions and can process up to 36 rail cars a day, according to a Lineage video.

“Our big advantage is that all of this takes place within the port’s footprint,” Zampa said. “It is the quickest route for U.S. producers to export frozen or chilled products to Asia.” Contact George Avalos at 408- 859- 5167.