Coming to a menu near you — groundfish?

On Pier 47, fishermen from the sustainable fishing company Pioneer Seafoods haul in their catch. In large blue bins, they unload thousands of pounds of groundfish — seafood that hasn’t been seen on San Francisco’s docks in these numbers since the 1990s.

Groundfish may not sound appealing, but for years they were the bread and butter of many coastal towns. These bottom- feeders encompass over 90 fish species, including cod, sole, rockfish and flounder.

In the late 1970s and early 1980s, groundfish were in high demand. At its peak, the West Coast groundfish fishery was worth around $50 million, according to the Pacific Fishery Management Council. But with the overexpansion of fishing fleets and a lack of conservation efforts, their numbers started to dwindle. By 2000, 10 of the most popular species were completely overfished, leading to a huge slash in revenue and the eventual collapse of the groundfish fishery. The federal government declared it an economic disaster.

Today, with the help of annual catch limits and a better understanding of groundfish 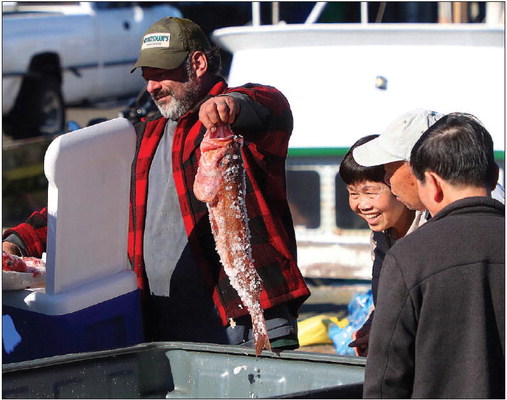 Giuseppe “Joe” Pennisi, founder of Pioneer Seafoods, holds up a Bocaccio rockfish for customers on Pier 47 in San Francisco.

biology, the fish are flourishing once again. But consumer demand for groundfish is struggling to catch up. Fishermen and local organizations alike are working to market these fish as a sustainable and tasty option for restaurant menus and family meals.

“They’ve been off the menu for 15 to 20 years, and there are young people who have never eaten or heard of groundfish,” said Jana Hennig, the executive director of Positively Groundfish, a nonprofit organization dedicated to supporting the West Coast groundfish fishery. According to Hennig, consumers are demanding wild-caught, local and sustainable fish, and “groundfish ticks all of those boxes.”

As of 2017, seven of the 10 overfished groundfish species have recovered, according to the National Oceanic and Atmospheric Administration Fisheries. These include darkblotched rockfish, bocaccio rockfish, canary rockfish, widow rockfish, lingcod, petrale sole and Pacific whiting. Even better, some of these species were restored ahead of schedule.

How did this happen? Most of it can be attributed to “catch shares,” or quotas on the number of fish that fishermen can catch. Fishermen and managers have also taken action by closing large fishing areas to protect groundfish habitat, along with seasonal closures and gear restrictions. Furthermore, there is now a mandate stating that a federal observer must be on every fishing trip to monitor the number of bycatch, or the incidental capture of unwanted fish and other marine creatures.

With groundfish numbers continuing to grow, organizations such as Positively Groundfish are determined to market this seafood to as many consumers as possible.

“We interact with chefs and food professionals and showcase our fish and encourage them to put it back on their menus,” Hennig said. “We want them to taste it and to feel it.”

Alan Lovewell, the founder and CEO of Real Good Fish, a for-profit organization that sources and distributes local seafood anywhere from Sacramento to Monterey, is also working to move fish off the boat and into the home.

Along with over 94 locations where Real Good Fish members can pick up their local fish, the company is working closely with schools and universities to get groundfish on the cafeteria menu.

“Schools only have $1.25 to spend on each meal,” said Real Good Fish chief nutrition officer Jen Gerard. “Lots of partners are saying that their budgets are too low for fresh fish. But with groundfish and the relationships that we have with Pioneer Seafoods and other boats, we can get a high volume of fish for an affordable price.”

One of the groundfish they having been promoting is called grenadier, better known as ratfish. With its unattractive head and long, tapering tail, there was no demand for this fish, causing fishermen to throw it overboard. But, “It’s a delicious fish,” said Gerard. “It was a wonderful abundance of protein that was going to waste.” Now, schools are demanding this groundfish to add to their cafeteria menus.

These locally caught fish are now the “fresh catch of the day” at some restaurants, and customers can find them at their grocery stores.

Draeger’s Market is stocking petrale sole, rock cod, also known as red snapper, and black cod, said Elmer Carrasco, the Danville store’s seafood manager, who gets his seafood from suppliers that cast their nets from Half Moon Bay’s Pillar Point to Monterey. He said the numbers were down in the ’90s but now there’s an abundance of groundfish “because the government stepped up and did a great job.”

Petrale sole, Carrasco said, is a very light fish that is easy to prepare with a little bit of olive oil and a bit of flour. “Our customers try it and really enjoy it,” he said.

Jim Stump, owner of Forthright Oyster Bar & Kitchen in Campbell, said there are certain fish people buy and certain fish people won’t buy. Groundfish is still trying to catch on, but he has noticed millennials, who he said have been raised on the Food Network, approach things differently and are more diverse and willing to eat more adventurously.

“Now there is a market out there for them,” Stump said. “There’s a full circle thing happening.”

His favorite groundfish is sand dab.

But the regeneration of groundfish has come at a great cost to local fishing communities.

To address overfishing, the National Marine Fisheries Service implemented a federal buyback program in 2003. The program permanently removed 91 fishing vessels and 239 fishing permits from the groundfish fishery and associated crab and pink shrimp fisheries off the coasts of California, Oregon and Washington.

“San Francisco used to be the hub of the West Coast fishing industry,” said Giuseppe “Joe” Pennisi, the founder of family-run Pioneer Seafoods, who sells groundfish both to distributors like Real Good Fish and directly to customers off his boat at Fisherman’s Wharf.

Today, the number of fishing boats in the San Francisco area have dropped significantly.

Fishing fleets are also responsible for the cost of the mandated federal observers, which can reach upward of $500 a day.

Pennisi argues that fishermen have been left out of the conversation when it comes to creating and implementing these federal restrictions.

“Fishermen are treated like garbage; they’ve thrown us away,” he said. “I can’t even go to the meetings because I can’t afford the hotel rooms.”

When asked why he stays in such a grueling profession, Pennisi harkens back to his deep fisherman roots.

“You should feel proud about feeding your nation,” he said. “I’m doing this for one reason only: because it’s the right thing to do.” 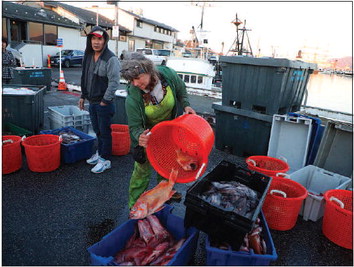 Joeleen Pennisi from the fishing vessel Pioneer sorts a bin of canary rockfish at Pier 47 in San Francisco. Once overfished, groundfish like these are making a comeback.